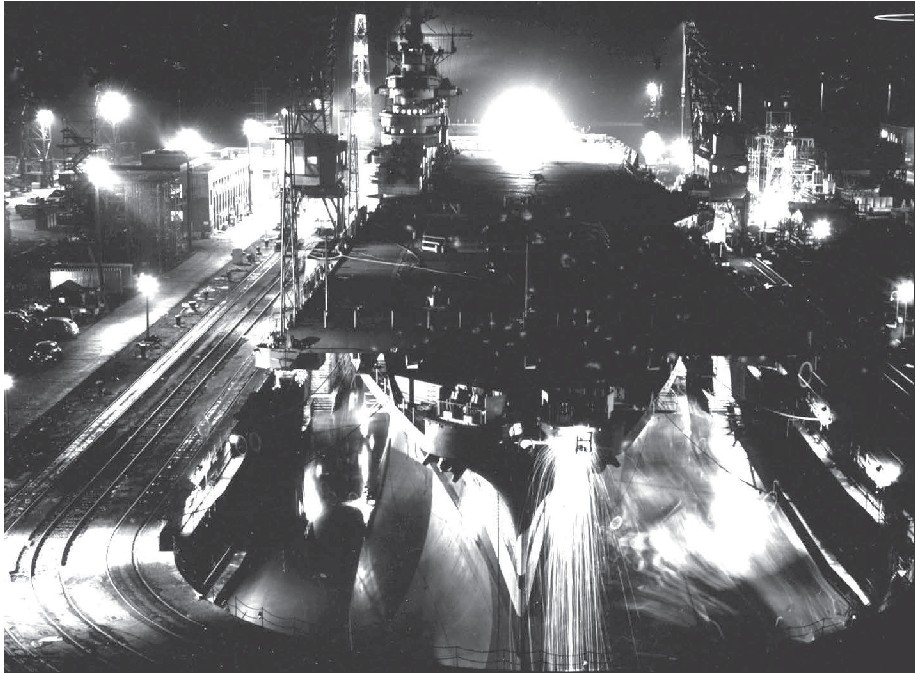 And yes, this then is the U.S.S. Antietam during December 1944, in the Philadelphia Naval Shipyard. You’ll notice the welding sparks at the bow of the ship. The shipyard personnel worked around the clock to complete the ship for a January 1945 commissioning. In the meantime, we (the Antietam crew) occupied the building near the starboard side of the ship.

It was an interesting time, what with all the activity. And, being in Philadelphia, it was only about 75 miles away from my home in Montclair, New Jersey. So I was able to go home a couple of times in December and January. This was both a rejuvenation and a great disappointment because “my” girl was both there and “not there.” It also allowed for a few liberties in Philadelphia.

But once we left the Navy Yard, I spent every night, for about eighteen months, on board the Antietam. It was home! I‘d be lying if I said I didn’t feel, deep down and unspoken, a certain stimulation knowing I was a part of this grand effort, this great enterprise, this magnificent ship. Here I was, still “wet behind the ears”, being “allowed” to serve on an Essex-class carrier, a ship that would surely have a huge affect on the outcome of the war. True, I wasn’t able to become an officer, but this was the next best thing, serving on a ship that would make a difference. However, it didn’t particularly turn out that way.

It turned out, instead, that we only supported the job that had to be done. (At school, I was fortunate enough to have been on the first team, and I didn’t get to know the feeling of “sitting on the bench”. Perhaps frustration is not an appropriate characterization here, but that word comes to mind. However I didn’t fully understand what was involved with the word “action”, though I was exposed to a lot of newsreels, etc. of war. Let’s just say that I was inspired, on the inside only, without understanding sufficiently the consequences of the word “action”.) I can remember, when we were berthed in the barracks to the left, looking out at the Antietam and wondering what the future might hold, far from here, on that floating airport.

Day in, day out, long they labored to form and shape and invest this marvelous vessel with the wherewithal to make the U.S.S. Antietam , as were all the “Essexes”, a sturdy force with which to reckon. (Parenthetically, the U.S.S. Antietam’s name-sake was the Civil War’s Battle of the Antietam Creek, that battle which was the bloodiest day in American history when there were about 23,000 casualties that day. (Oh to sail a ship with such a name! Did this bode well for those of us who rode it into harm’s way, should that be our destiny? ) In any event, it was the result of that battle that Lincoln decided to announce the Emancipation Proclamation thus freeing all of those not so endowed. It did not have the grandeur of the later Gettysburg Address but it held a principle that rings through history and the following generations of all peoples in this country. Can it be said that the Antietam leads the way to freedom? No, but it’s a grand thought.)

There’s beauty to the night here at the birth of this grand ship. So it is, day and night, night and day, the work went on to bring the U.S.S. Antietam on line. Yes, it was now sequestered in the depths of the drydock but soon, very soon, it would be set free and allowed to “get its feet wet”. That it did on 28 January 1945 when the war was approaching a climactic ending in the Pacific Theater. There was yet much violence ahead as both sides were pressing for an advantage that would see them through almost four years of withering conflict. The thought here was would we be a part of the punishment being dealt by the Kamikazes?

This book (On Which We Serve: Where Life-Lessons are Learned, Parts 1 and 2) can be considered to be two books in one. That is, Book 1 consists of pages with a photograph and an enlarged caption that describes what's in or what's happening in that photo.

Book 2 frequently, but not always, is a seamless segue (on the same page) from Book 1 to a discussion of some social aspect of what just preceded it. These social topics could be Responsibility, Accountability, Respect for Others and Self, Earned Self-Esteem (those who have it will "never" do anything antisocial), Empathy, Trustworthiness or similar values and virtues.

Thus each text-and-photo page may be considered a “couplet” in that the couplet is self contained. This means that each text-page can be read as a standalone and no continuity is lost by doing so. This has the advantage that the reader can savor that page and feel no need to hurry on to the next page. It encourages a meditative approach similar, if I may, to reading the Bible.

You could even form a discussion group based on a given page (book clubs, take note).  One caveat should be made: Each page might also contain a running commentary on a given subject such as the technology of the gunfire control system or the process of the war in the Pacific as it moved westward.

Book 1 represents the title “On Which We Serve” while Book 2 deals with the subtitle “Where Life-Lessons Are Learned.” Book 2 is in no way meant to be pontifical or dogmatic but rather it's meant to stimulate thoughts concerning a more sane and sanguine society.

One final point: These books can be quite literally said to be one of a kind for all time. That is, forever. Pray tell, why?? No one has ever written a book about the activities on the flight deck of a WWII fleet aircraft carrier. In addition, no one ever will because those who could are either dead or very soon will be. Sad but true. Since I was a flight deck crewman (Airdale) for a solid year on a training ship during 1945–1946 I thought it imperative to give those hard-working Airdales their day in the sun. They earned it.

Note: I have tried very hard not to include politics or religion in these pages. I don't want to stir up animosities that seem to invariably occur when these subjects are addressed. Besides, there are a plethora of such books.

Finally, my approach to writing this book consists of the following:
1. Keep it precise and concise.
2. Be scrupulously accurate.
3. Use words that are appropriate to the meaning you’re conveying.
4. Make each sentence of significance and substance.
5. Don’t use filler: Your reader's time is too important.
6. Try not to use elongated sentences (although sometimes stream of consciousness is useful, if done judiciously).
7. Remember: Brevity is the soul of wit.
8. Above all, maintain clarity; without it you have nothing.
9. And it doesn’t hurt to think in terms of timelessness.
Now, read on and ENJOY the trip!

This book is an unedited first-person account of real Word War II events and as such, you may find a few typos. The author has decided to leave them uncorrected to make it clear that this book was put together by only ONE person, that is, by Edward Atkins alone.